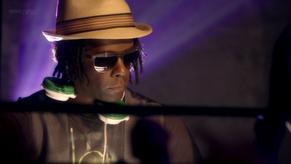 Sadly, most of the Hustle soundtrack is made up of music never available to the public. These soundtracks are difficult to track down  exactly because as they have no lyrics, you have no way of searching for them. However, Hustle has also featured commercially available songs which we are trying to accumulate here! The songs here are arranged by the order in which they appeared. If you know of any songs in the series that have been missed out here (there are many) please email us so we can include your submission.

Please note that these songs are not included on the soundtrack available on this website due to copyright, and as you can find them on iTunes and YouTube easily.

Song: Little Johnny Jones Sequence
Artist: James Cagney, Warner Bros Chorus
Midway through the episode, we see the gangster and film buff stop his bodyguards beating up someone so that he can enjoy this dance scene from the 1942 film Yankee Doodle Dandy

Song: Give my Regards to Broadway
Artist: Mantovani Orchestra
When Danny and Mickey are trying to convince the mark to invest, they perform a song and dance routine to this music.

Song: Daydream in Blue
Artist: I Monster
In the scene where Danny is at the art gallery and discovers Meredith Gates spends millions of pounds buying Mondrian paintings, the iconic Hustle freeze-time trick is employed as Danny, with this song playing in the background, takes Meredith Gates's drink and has it himself,

Song: Libiamo nei lieti calici
Artist: Various
At the end of the episode, Mickey and Albert arrange for a fat opera singer to sing this famous song (which comes from Giuseppe Verdi's opera 'La Traviata') outside Victor Maher's office window.

Song: All things to all Men (Instrumental Version)
Artist: The Cinematic Orchestra
In the penultimate scene, the evil utility CEO is persuaded to bet half a million pounds on a horse which...of course loses. When he hands over the briefcase this song plays in the background.

Song: Kitty Comes to Town
Artist: Heavyshift
In the second scene, when the gang meet Sean's girlfriend, this jazz music  plays. A much shortened version of this appears on the Hustle soundtrack of this website, under the title "Hot Girl for Breakfast"

Song: Shape of my Heart
Artist: Sting
In the very last scene, Albert gets his timings wrong and so is too late to speak further with his former partner and his daughter, as they leave for America before he can get to their hotel. As he walks the streets and is eventually comforted by the other members of the team in a casino, this song plays. For some reason this music is omitted on the DVD release

Song: Evil Beauty
Artist: Blackmill
In the introductory scene, this music plays as the grifters are chased and "shot"

Song: Song 2
Artist: Blur
In the scene when the mark is having a champagne bath with several girls, he hears his father has just died. Incredibly pleased that he has inherited so much money, he laughs and celebrates to this song.